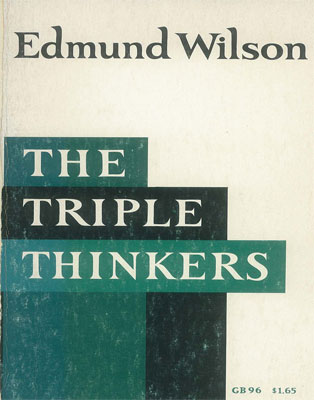 Wilson helped Nabokov to get started in the US. Not only getting a paid job and a place to stay, but also friends to start with…
Wilson knew Russian, he was a fellow traveller, but not stuck in it too strongly, otherwise Nab would have rejected him.
Wilson was a Pushkin expert as far as that is possible for an American intellectual with recently aquired language skills.
This essay collection from the late 30s, ie before Nab showed up in the US, has a clear center piece for me: the essay on Eugene Onegin at the occasion of Pushkin’s 100th death anniversary. Wilson gives us a condensed summary plus an evaluation of the Russian masterpiece, a novel in verse. He rejects the comparisons to Byron and prefers Julien Sorel as a parallell: Stendhal’s hero in Black and Red(which unfortunately and erroneously Nab didn’t like very much). Pushkin, to Wilson, is more a rational word mason, like Flaubert, than a fountain of folksiness like the Romantics. He goes to great lengths to explain how any literal translation of the poem would kill it: the language is too compact, it is very hard to maintain meaning and standard in English.
And then, barely 20 years later, Nab goes and does exactly that: a literal translation, not even trying to aim for poetry, only for meaning. A disaster! (not my opinion, but Wilson’s) (while Nab started doubting W’s knowledge of the language…)
And one more on Pushkin: a prose translation of the Bronze Horseman, the poem which made Pushkin suspicious to the secret police.
Frankly speaking, I think Wilson was nuts. What he produces here is quite exactly what Nab wasn’t allowed to do later!
But let’s not ignore that there is more than Pushkin in this collection of essays. I also recommend the one on Flaubert, from which the title is taken: Flaubert wrote in a letter to Louise that writers are triple thinkers, without religion, fatherland, nor social conviction. That is of course a challenging program which will not gladly be accepted by everyone.