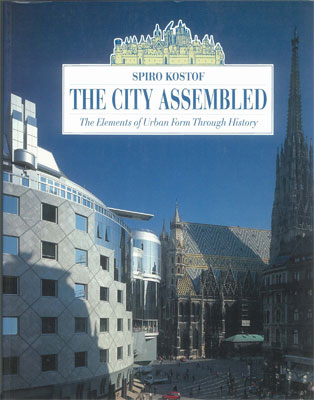 The City Assembled is the companion volume to Sprio Kostof’s The City Shaped(reissued in paperback by Bulfinch, spring 1999) and continues Kostof’s unique study of urban landscape and process. Moving from the historical and cultural overviews of the city in the first book, Kostof descends into the streets, sidewalks, squares, markets, and waterfronts of the city and presents a detailed urban anatomy. The book is organized thematically around the structural phenomena of the city-the city edge, street, public space, the marketplace, and the realities of cultural and ecomomic segregation-and explores the customs, practicalities, and biases behind the elements of the city. In every instance, Professor Kostof follows a far-ranging story up to the present to illustrate how fresh the discussion remains today. In the past, the various elements of a city evolved in response to a variety of pressures. Today, they are usually the result of planning decisions. In a final chapter, Kostof considers ‘urban process’ “the effect on cities of natural disasters, wars, and comprehensive redevelopment” compared with incremental growth and change. His book is thus an exercise in architectural and social history, a case study for the present, and a pointer for the future.

The story is also told in over three hundred drawings, prints, paintings, and photographs that illustrate not only typical elements of a city, such as a colonnaded street of ancient Palmyra, but also specific uses of particular elements, such as Prague’s Wenceslas Square. The City Assembled is a fascinating account of the urban experience, writte, like The City Shaped, for general readers and professionals alike.