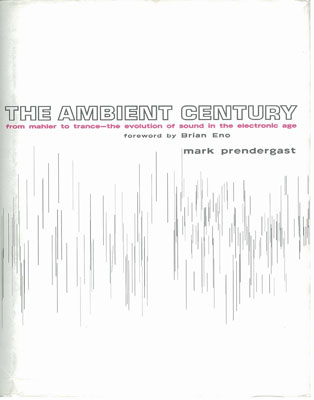 A comprehensive and absorbing look at the music of the twentieth century, with an introduction by Brian Eno.

More and more, innovative musical ideas became intertwined with technological change. Multi-track recording, editing, and improved microphones allowed for quieter, experimental elements to gain prominence. And with the advent of digital synthesizers, new music could be made by anyone and sound like almost anything.

The Ambient Century is the definitive chronicle of a century of musical change. It reveals the drift from composers to non-musicians, from the single note to the sample. Encyclopedic, yet with a strong narrative, The Ambient Century covers hundreds of artists, including such diverse artists as Gustav Mahler (the pioneer of modern music), Phillip Glass, New Order, and Moby. Lively, compelling, and authoritative-and boasting an unmatched discography. The Ambient Century is a treat for music lovers of all kinds.


BEYOND THE BUBBLE
NEW SURFACE FOR ARCHI.
ARCHITECTURE IN SPAIN