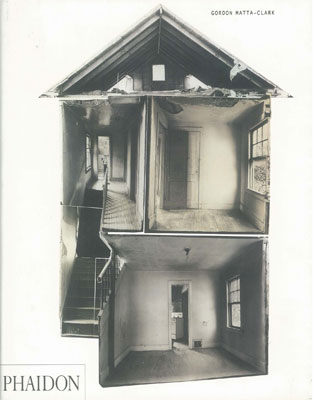 After studying architecture at Cornell University, Matta-Clark developed more interest in buildings about to be destroyed than in the ones about to be built, as most architects would. He first forced his way into abandoned apartment buildings in the Bronx , and using a chain saw, would act as an architecture pirate, cutting pieces of walls and floors, only to leave behind the remains of what once was architecture. From pieces of walls his work shifted, in 1974, to the scale of a whole suburban house. “Splitting”, probably his most popular work, was made by cutting a vertical line through the entire width of the house, and transforming the cut into a yawn, after lowering the foundations on both sides of the house. Erasing the boundaries between architecture, sculpture, and even drawing (his cuts have often been refered to as drawings in space); his building-cuts can also be understood as a social critique of the standardized suburban architecture that flourished during the postwar decades. The book opens with Thomas Crow’s survey text on the artist (24,000 words). Divided into 4 chapters plus an epilogue, this richly illustrated essay provides insight into the career of the artist, from his childhood spent between New York and Paris, to his premature death in 1978 at the age of 35. These essays span the multi-faceted practice of Gordon Matta-Clark, with a particular emphasis on his building-cuts, the group of works he is most renowned for and that compose the most important part of his career. This book also includes a “Documents” section, composed of original interviews, articles, and documents compiled by editor Corinne Diserens. Several interviews, some of them never published before, allow the reader to understand more fully, and through Matta-Clark’s own voice, the more pragmatic, technical, and physical dimensions related to the creation of his building-cuts. Some articles and essays of reference, most of them published in the 1970s and today out of print, are also republished and offer a unique critical background and context to his work.