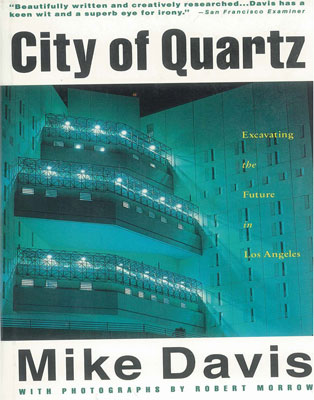 Mike Davis peers into a looking glass to divine the future of Los Angeles, and what he sees is not encouraging: a city–or better, a concatenation of competing city states–torn by racial enmity, economic disparity, and social anomie. Looking backward, Davis suggests that Los Angeles has always been contested ground. In the 1840s, he writes, a combination of drought and industrial stock raising led to the destruction of small-scale Spanish farming in the region. In the 1910s, Los Angeles was the scene of a bitter conflict between management and industrial workers, so bitter that the publisher of the Los Angeles Times retreated to a heavily fortified home he called “The Bivouac.” And in 1992, much of the city fell before flames and riot in a scenario Davis describes as thus: “Gangs are multiplying at a terrifying rate, cops are becoming more arrogant and trigger-happy, and a whole generation is being shunted toward some impossible Armageddon.” Davis’s voice-in-a-whirlwind approach to the past, present, and future of Los Angeles is alarming and arresting, and his book is essential reading for anyone interested in contemporary affairs. –Gregory MacNamee