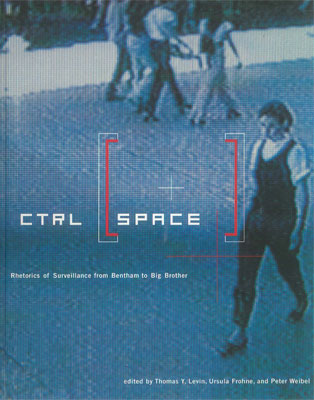 This book investigates the state of panoptic art at a time when issues of security and civil liberties are on many people’s minds. Traditional imaging and tracking systems have given way to infinitely more powerful “dataveillance” technologies, as an evolving arsenal of surrogate eyes and ears in our society shifts its focus from military to domestic space. Taking as its point of departure an architectural drawing by Jeremy Bentham that became the model for an entire social regime, CTRL [SPACE] looks at the shifting relationships between design and power, imaging and oppression, from the eighteenth to the twenty-first centuries.

From the photographs taken with hidden cameras by Walker Evans and Paul Strand in the early twentieth century to the appropriation of military satellite technology by Marko Peljhan a hundred years later, the works of a wide range of artists have explored the dynamics of watching and being watched. The artists whose panoptical preoccupations are featured include, among others, Sophie Calle, Diller + Scofidio, Dan Graham, Pierre Huyghe, Michael Klier, Rem Koolhaas, Bruce Nauman, Yoko Ono, Thomas Ruff, Julia Scher, Andy Warhol, and Peter Weibel. This book, along with the exhibition it accompanies, is the first state-of-the-art survey of panopticism—in digital culture, architecture, television, video, cinema, painting, photography, conceptual art, installation work, robotics, and satellite imaging.