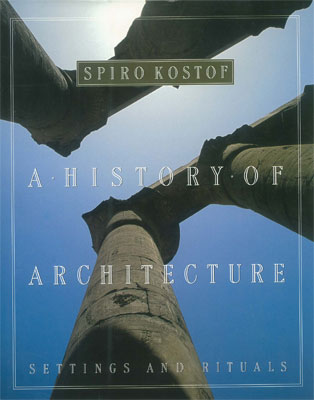 A History of Architecture

When the late Spiro Kostof’s A History of Architecture appeared in 1985, it was universally hailed as a masterpiece–one of the finest books on architecture ever written. The New York Times Book Review, in a front cover review, called it “a magnificent guided tour through mankind’s architecture,” and The San Francisco Chronicle wrote that “Kostof…has enthralled a generation of students…. Now he has done the same thing for the public at large, in an extraordinary book that is a new kind of architectural history.”
This magisterial work has now been revised and expanded by Greg Castillo, Kostof’s colleague and literary executor. Insightful, engagingly written, and graced with almost a thousand superb illustrations, the Second Edition of this classic volume offers a sweeping narrative that examines architecture as it reflects the social, economic, and technological systems of human history. The scope of the book is astonishing. No mere survey of famous buildings, Kostof’s History examines a surprisingly wide variety of manmade structures: prehistoric huts and the TVA, the pyramids at Giza and the Rome railway station, the ziggurat and the department store. Indeed, Kostof considered every building worthy of attention, every structure or shelter a potential source of insight, whether it be the prehistoric hunting camps at Terra Amata, or the caves at Lascaux with their magnificent paintings, or a twenty-story hotel on the Las Vegas strip. The Second Edition features a new concluding chapter, “Designing the Fin de Siècle,” based on Kostof’s last lecture notes and prepared by Castillo, as well as an all-new 16-page color section. Many of the original line drawings by Richard Tobias, as well as some 50 photographs, have also been updated or replaced, for improved clarity.
Visually and intellectually stimulating, this book is at once a compelling history and an indispensable reference on all aspects of our built environment. It achieves for architecture what Janson’s history accomplished for visual art.